What happened in the sky over Sedona the early morning of 9/13/12?  Was it just a missile launch/intercept or was the missile launch accompanied by something else as well?

My intuition suggests there was more going on in the Arizona/New Mexico Sky during the early morning of 9/13/12 than we’ve been led to believe.

Here’s what I Saw

I suspect that the interaction of the man-made missile technology with the energies already present within the sky created this beautiful illumination we don’t often see accompanying a regular missile launch/intercept. 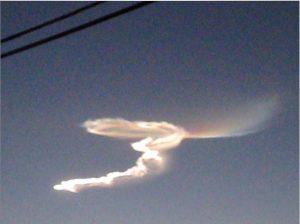 Why this Was Not Just a Missile Launch

Shortly after the event on 9/13/12, it has been reported (to Tucson News Now news agency) that the White Sands Missile Range in New Mexico had in fact launched a missile the morning of 9/13/12, firing it off from Ft. Wingate in northwest New Mexico, near Gallup.  The Tucson News Now’s story on this event confirmed that “[t]he test included two PAC-3 Missiles against a single target. The company [White Sands Missile Range] said the first interceptor destroyed the target and the second missile self destructed as planned.”  [1]

After hearing there was a missile launch on 9/13/12, many dismissed the entire event after being told it was “just a missile launch” and that the interplay of the sunlight with the contrail clouds in the sky from the missiles was what caused the beautiful rainbow-like display in the sky.  I feel there’s more to the story.

I personally witnessed the event, took both pictures and video of it and saw something spectacular in the process that I’ve yet to see any other pictures of this event reflecting.  Here’s a picture of what I saw that makes me feel it’s possible there was more to this event than just a regular missile launch/intercept.

Here’s a picture of what I saw: 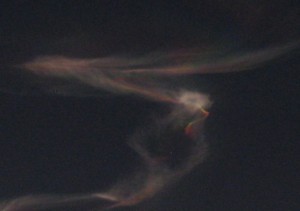 QUESTION?  What is that rainbow colored curvy stick structure exiting out of what appears to me as a heart-shaped portal or illuminated area?

What is that?  How does a missile or just normal light reflection from gases bouncing around in clouds produce that type of very tangible, 3 dimensional structure?

Note, this rainbow, stick energy first exited from the heart-shaped oval several minutes AFTER the contrail of white smoke from the missile(s) had already gone by (notice the wispy cloud, contrail remnants)?

This stick structure started after the missile(s) had already gone by and it continued to grow to be a much longer “stick” than what it shown in this picture.  The picture above does not do the structure justice as it appeared very three dimensional and very, very luminescent.

Summary of my personal observations of the “Rainbow Stick Structure”:

– came exiting out of what appeared as a heart-shaped portal of some type.

– it grew and grew taking on more a discrete, tangible form as the contrail clouds were dissolving.

The Full Video of What I Saw

Below is the full version of the videos and pictures I took of this event.  (NOTE:  None of the images have been altered.  Some images appear darker/lighter than others because some were pictures taken with a flash and some were videos or individual screen captures taken from the video.)

Could this Have a Missile Launch/Intercept AND a Star Family Intervention?

It has taken me these few days since 9/13/12 to inquire and receive information back about this event.  I ask a question and then await the return of an answer, which can come in various forms over time.  I still don’t have a definitive answer to this event, but several strong, possibilities and tidbits of information have come through.

The Norway Spiral of December 2009 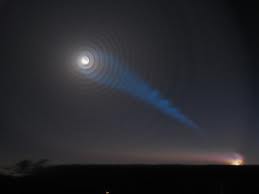 Around the time of this event, we were told by the media that this was a “failed” missile launch.

However, here’s a more complete explanation of what occurred with the Norway Spiral Event, as was shared by Star Family shortly after this event [3]:

Galactic Star Family was present in large numbers in the area of Norway as, amid other reasons, they were gathered in the skies in support of President Obama being present in the area giving his Nobel Peace Prize acceptance speech around that time. Through our technology, Humanity’s military became aware of the presence of Star Family in the skies even though their ships were not visible to the naked eye.  Our world military leaders (some acting out of fear and some out of a genuine lack of understanding of what was happening and a desire to protect humanity), initiated and utilized a secret technology directing it at the starships.  Our Star Family responded with their own technology based in love which neutralized the effectiveness of the lower vibration technology Earth’s military members had directed at them.

The beautiful spiral and colors were the result of the coalescence of Star Family’s love energies/technology as they mixed in with and transmuted, transformed and neutralized the effects of our Earth human technology.  Star Family’s technology was initiated in a loving manner and caused no harm to any as it simply neutralized the weapons our military had directed at Star Family while causing harm to none.

So what we saw in the sky during that Norway Spiral event was a tangible example of “love energy” in action.  Amazing!

What many are also not aware of though is that something else occurred during that Norway Spiral event.  A portal opened at that time and several of Star Family came through the portals during the event and remained within Earth’s atmosphere for several days following the event. [3]

So the Norway Spiral of December 2009 showed us that sometimes interaction of Star Family and Human Family technology can produce beautiful displays of color and light within our sky.

Did something similar to the Norway Spiral 2009 happen in our skies the morning of 9/13/12?

So with the backdrop of the Norway Spiral, here’s what I’m feeling may have occurred in the sky above Sedona/Arizona/ New Mexico on September 13, 2012 ….

Galactic Star Family has confirmed on several occasions that they are at times now stepping in to stop, disarm, disable or neutralize nuclear and even dummy nuclear missiles, missile tests or the use of nuclear weaponry worldwide.    This has been occurring worldwide since the 60s and has involved missiles launched from the U.S, European Union, North Korea and other countries.  [4]

What if Galactic Star Family used technology to disable or neutralize the White Sands Missile Range missile launch/intercept and the beautiful after affects in the sky that we saw on 9/13/12 came from the interaction of Galactic Star Family’s technology with ours?  What if, again, just like with the Norway Spiral event, what if the interaction of Star Family’s love based energies/technologies with our human technology somehow led to the beautiful display of energies within our sky on 9/13/12?

I was reminded of a very important point a little while back.  These times of ascension are not about either/or thinking – that’s duality.  Almost everything we experience is often multi-layered – with multiple separate, yet complementary experiences interwoven together, one on top of or intertwined with the other.  So we can look at just the outermost layer of an event or experience (i.e. the missile launch) and see one thing.  Or we can choose to look at the other inner, interwoven layers of any particular event and potentially see much more.

So was the 9/13/12 event a missile launch/intercept?  It seems we have some credible evidence that it was.  Was it more than that though?  My heart says yes!  We can add to the missile launch event.  We don’t have to make it just and only a missile launch and nothing else.  I feel if I do that in this instance, I’ll be missing out on some of the incredible love, beauty and grace involved here.

I feel the appearance of that rainbow, stick apparition definitely supports the idea that there was some type of Star Family intervention with the missile launch/intercept events that occurred on 9/13/12.

I’m still processing the event, so when I share here, please understand I’m not saying my explanation is exactly what happened and the only thing that happened.  Many times, Spirit and Star Family will interact with us through some kind of event and then give us as Humanity time to process it, discuss it amongst ourselves, mull it over so to speak, before coming forth with an explanation about it.

I look forward to confirmations from Star Family as to what more, if anything, was involved in the 9/13/12 event!

[3]  The above description of what happened during the Norway Spiral is based on both messages from Star Family I directly received myself shortly after the Norway Spiral event AND a channeled message (I ran across later) that was included in the Feb 2012 issue of the Sedona Journal of Emergence from an entity actually present on one of the starships that entered Earth’s atmosphere through the portal opened during the Norway Spiral event. (Visit SedonaJournal.com archives to obtain a copy of the issue for the full channeling from this entity – “ET Human, Blue Spiral Light over Norway“, Robert Shapiro, http://www.lighttechnology.com/store/products/sedona-journal-emergence-february-2010).

[4]  A couple messages confirming this include:  “UFOs Are Stalking and Intercepting Dummy Nuclear Warheads During Test Flights” – http://www.ufohastings.com/articles/ufos-are-stalking-and-intercepting-dummy-nuclear-warheads-during-test-flights and “UFO’s Stop US Missiles” covered on Larry King Live – http://www.youtube.com/watch?v=CuuinoHCym8” and “US Army UFO Retrieval Team Member Clifford Stone: The Extraterrestrials Are Here to Help” – http://the2012scenario.com/2012/07/us-army-ufo-retrieval-team-member-clifford-stone-the-extraterrestrials-are-here-to-help/ and http://the2012scenario.com/2012/07/new-letter-emerges-about-ufo-over-nuclear-missile-facilities/]