“The cabal has been informed by representatives and by two crop circles that appeared on June 2 (Manton Drove, England) and on July 27 (Windmill, Hill) that the divine deadline beyond which the galactics will no longer feel obliged to take Earth’s governments into consideration is August 4, 2012.” [1] 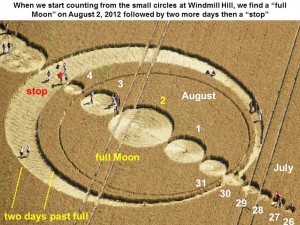 Here’s a video posted by BigBadHally on youtube which appears to show a starship captured by Sky News video coverage on July 27, 2012 at the Opening Ceremonies of the 2012 Olympics.

Here’s another video from EriGAI007 on youtube showing the same starship:

Lastly, below is a summary of an interview of Sierra Neblina by Geoff West and Steve Beckow of www.the2012scenario.com on the Cosmic Vision News radio show held July 27, 2012. [2]   During the interview, Sierra Neblina, who is a Pleiadian starseed with a braided walk-in and a representative of Earth to the Galactic Federation, discusses information she’s received on the current status of disclosure and the steps being taken to implement some form of disclosure during the 2012 Olympics Games.

Geoff West and I interviewed Sierra Neblina yesterday (July 27, 2012) on the pace of Disclosure generally and the significance of the Olympics for Disclosure. Sierra is a Pleiadian starseed with a braided walk-in and a representative of Earth to the Galactic Federation.

She revealed that the galactics are trying to push the hand of some government leaders to acknowledge that the time for Disclosure is well past. For the galactics things are just not going fast enough.

Sierra tells us that Earth officials have until August 4th before matters are taken out of their hands and pass into the hands of the galactics.  Aug. 4 is the divine deadline for terrestrial leadership to impact events around Disclosure.

“There are different levels of energy being beamed towards the Earth and different alignments of planets and August 4th is one of those alignments.

Prior to August 4th, the galactics have not been able to just come down here and land.  That would have been in violation of the human planetary evolutionary processes. Past Aug. 4, the needs of the Divine Plan for Ascension take precedence over the free will of the people opposing Disclosure.”

She said that time after time officials have sat on their hands after agreeing to plans. Now their hand may need to be forced  if they don’t start to allow certain things to happen.  The galactics have said to world leaders: “If you don’t get back on track we will use the Olympics for our purposes.”

She said that there were agreements to put the right people in the right place during the Olympics. The galactics work by setting up several different scenarios, rather than just one.  It could be that an actual galactic person – a participant in the games – that comes forward to show their true higher-dimensional form during the Olympics or a ship lands during an event or sightings occur where newspeople are watching.

Sierra said that, “we’ll know when things are about to break when someone in the U.S. government steps forward with documents or it starts to come through the U.S. news.”

“There have been increased sightings for some time now. The quality of witnesses coming forward has been ‘incredible,’ she says.  It’s happening a lot but it just isn’t getting to the airwaves fast enough. There are a lot of people filming right now but what they produce has not been allowed to come to air.”

“The galactics won’t be satisfied with a broadcast in which viewers are seeing something happen in a nebulous room. They want people to be able to see the ships in the sky with their own eyes.”

The U.S. and other governments have been given a chance to release the information that they have or the galactics will do it.”

Sierra said that a “go” team from the 2012 Scenario and InLight Radio will actually go on site and report developments.  Geoff West has been given his early notice that he will be ‘selected’, Sierra felt such a call was imminent.

Apparently I’ll need to complete my process, which I’ve called “Absorption,” before I get the call.

The Denver shooting was an attempt to divert a plan President Obama had to have a high-ranking American official come forward and start Disclosure through the release of documents.  It put that plan on the hold and forced Obama to go back to his contact and say “What are we to do now?”

Other governments have abided by their deadlines for document release but every time the American government moves to release documents a fire or a shooting occurs.

Sierra saw President Obama in Farrah’s hospital room and feels he has a strong walk-in presence. He’s full of compassion. She said a lot more on the subject but again it wouldn’t be prudent to discuss it now.

Sierra discussed the special significance of Denver to President Obama and for his presidency, explaining why he had to come to Denver and set things right. But that discussion also has to wait.

Sierra described a time a few months down the road when galactic and Earth children would come together and tell the adults, “Enough. We’re here to show you the way and it’s time for you to listen.”  She said that they’re being prepared on the ships right now to be ready to play their part.

There are systematic steps that are being put in place. Some of them get moved around, but there is a hard plan. But because governments have been dragging their feet and blocking some of the stuff that’s ready to go on TV, there will need to be a forcing of the issue.

“The Olympics is the perfect time. The whole world is watching. It’s when every country has a stake in something. We’re going to see a lot of beautiful things from the athletes themselves and from countries.”  She predicts that global consciousness will start to rise very quickly in the next two weeks.

There have been hundreds of landings but everyone has been locked into a cover-up. The galactics have repeatedly said here’s the next thing you need to do. But the foot-dragging has slowed progress down or brought it to a standstill.

There’s a constant moving around of timeframes, of how events will mesh in the future. But something will have to happen in the next short while.

[1]  “An Earlier Disclosure Plan May Have Been Impacted by the Denver Shootings”, July 27, 2012, http://the2012scenario.com/2012/07/an-earlier-disclosure-plan-may-have-been-impacted-by-the-denver-shootings/